The Abominators (Mucker, Bob, Cheesy and Boogster) are the coolest kids in school, and the best at elaborate and very funny pranks.

They don’t know quite how to react when they are confronted by new boy Cecil Trumpington-Potts, who talks in baby talk, dances like a mad grasshopper and is the possessor of over 100 pairs of silk pants which he calls his ‘panty wanty woos’.

Cecil is determined to become a member of the gang. To put him off, the Abominators give him three impossible tasks (the first involving the underpants of long suffering head teacher Mr Nutter, and the school flagpole.)

And so the mischief begins…!

Just some of the excellent reviews for The Abominators:

“The youngest, who struggles with reading, was motivated to get from one funny antic to the next!”

“This is a thoroughly entertaining book, eminently readable by its target age range and great fun. It’s `rude’ enough to offer a guilty appeal without going too far. I thought my grandson was going to wet himself, laughing hysterically at times! The book has many interesting characters and is nicely illustrated. It should appeal to just about all 7-11-year-old boys and many girls as well. Looking forward very much to the next one.”

AVAILABLE IN INDEPENDENT BOOKSHOPS, WATERSTONE’S, WH SMITH AND ON AMAZON. 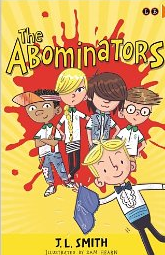 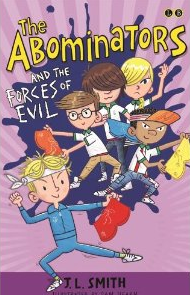